Well, it was when I first wrote this in October. I work in mental health myself, and I created these chalkboard sandwich boards for a special event. Added bonus: something to tie bundles of balloons to and catch people’s eye. We had these real estate sandwich boards getting cobwebby in the garage, which had been used for events before, with printed paper taped to them. I figured with a new year almost upon us, I would come back and finish what I never got around to posting. 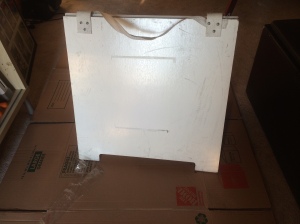 The husband helped sand off the remaining tape bits since my shoulder is still injured…and then he actually had to finish the painting, too.

As with any painting project, you want to prepare your surface first- that means cleaning, sanding, and cleaning again before you actually get started on the fun part. [Do as I say, not as I do.] Once that’s complete, prime your surface. Thennn you can finally start slapping on that chalkboard paint! Make sure you do two coats, and DO NOT attempt to write on it until a full 24 hours have passed. If you get antsy and started drawing on it early, you run the risk of gouging your paint and having to paint it all over again. 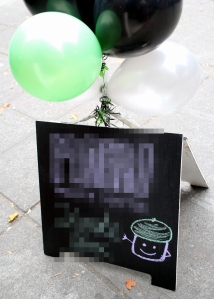 There’s the finished product! (pixels added for privacy and all that…). The best part is, they can be reused for other events.

Happy fall! This is my favorite season. It was a doozy of a summer and it’s been 5 months since my last blog post. Moving (again), work conferences, family visiting, and an injury that has had me out of normal commission for 2 months now. With just 2 days left of summer, this past weekend I used one of the last warm and sunny days for some paint-related projects. We’re in a condo now and I’m not used to having such limited access to outside space. I had to make do with our tiny little balcony. Luckily I still had some extra large boxes laying around to protect my new patio set! 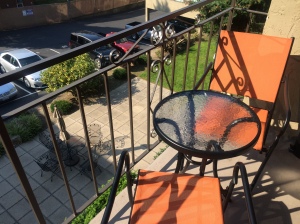 It’s a pretty cute balcony even if it’s not roomy.

I bought this slightly hideous gold lamp months ago – when I bought the little wood table that I refinished for my office – and I have struggled to find a shade that would fit it for literally the entire 5 months I’ve been MIA. 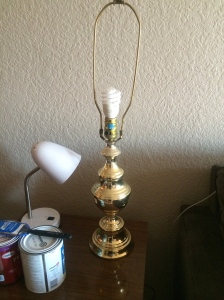 For whatever reason it has a really tall harp (did you know that’s what the wire thing your shade sits on is called? Cause I did not). Funny story, there are very limited options available when you get past a 10″ tall shade. It has been a real sad look for our living room, with its naked bulb. I almost used my snippers to shorten it…then I almost gave up and donated back to Goodwill. But at the last moment, I realized you can buy different sized lamp harps at the hardware store. Der. END_OF_DOCUMENT_TOKEN_TO_BE_REPLACED

I’m getting settled into my new office and decided I wanted a small seating area in front of my (awesome, beautiful, bright) window. A month and a half later, I’m still kind of in awe of the natural light in my office. And there’s some great wildflowers outside one of my windows. I just love it!

I found this real wood table at the Goodwill for $20, but it had some deep gouges on it. I liked the spirally detail on the center post. 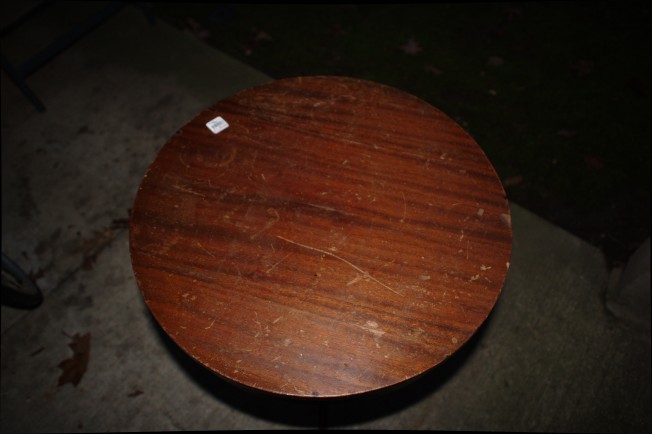 END_OF_DOCUMENT_TOKEN_TO_BE_REPLACED

Many, many years ago as a teenager I had this solid wood “hope chest” a family friend gave to me. I call it “the trunk”. I decided to turn it into a mosaic project. At the time, 15 or so year old me had a red and grey bedroom, was obsessed with Nightmare Before Christmas, and was just starting to flex my crafting muscles. I chose red and black as the primary tile colors, and made big swirl shapes that still remind me of Nightmare Before Christmas. I painted the outside a flat gray.

I really enjoyed smashing tiles for this project, too.  Breaking things is therapeutic. Especially breaking them with a hammer. Especially during some angsty teen years.

I worked on it for quite some time, slowly and not super steadily. When the time to move off to college came about 2 years later, it was 75% of the way complete. I had added casters to the bottom so it was easier to move and could be used as a coffee table in my college life (hah! Like there was room for a coffee table in any of my dorms!). I have lugged this trunk up and down all kinds of stairs.

In college I didn’t work on it much at all. A year after graduation I decided to move across the country for a position and a new experience… and the trunk wound up in my artsy coworker’s basement, because I didn’t have room to bring it along on the drive. She owned a house and as an artist understood why I didn’t want to part with my (unfinished) project. Bless her.

Three years later, I was back in my college town for my best friend’s wedding. My coworker asked if I could you know, get my unfinished trunk out of her garage while I was in town. (I can’t believe she waited 3 years before saying anything?!) Of course, I had flown in, so I couldn’t really bring it with me- I decided it was time to donate it or otherwise part with the trunk for good. An AmeriCorps friend of mine, Stephanie, decided she would not only take it for me, but finish it! I was so happy knowing it was going to a good home and not the trash heap.

And the best part is, she actually followed through. Here’s The Trunk, finished more than 10 years after I first started it! 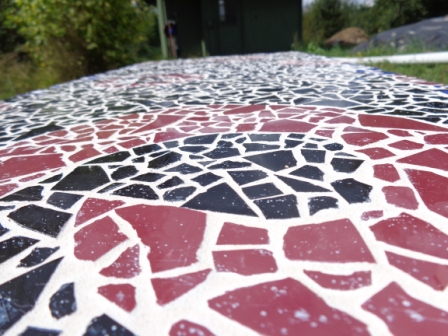 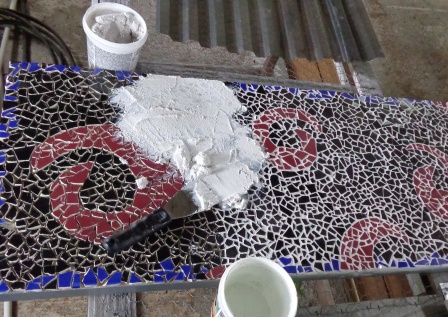 Grouting it was probably one of the hardest parts, though I can’t claim firsthand knowledge.

Stephanie, “the finisher” as I shall call her, decided to add another color to brighten it up a bit. I can’t blame her…. my style now would be a lot less dark. 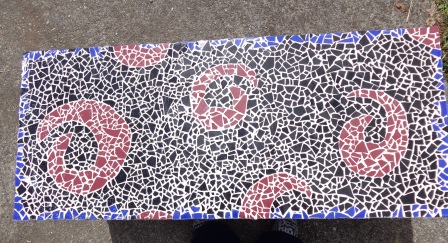 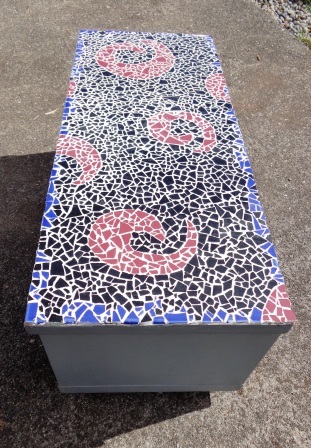 It’s satisfying to know that this isn’t still in a state of half-completion after all these years. Thanks Steph!

I had a great project in mind for a February post, but it involves our couch…

And it looks like we won’t be keeping that couch much longer, so for now I have  abandoned that project.

I accepted a new position in my home state of Washington about 3 weeks ago. This coming week, we’ll be driving across the country from Chicago (Hello Mt. Rushmore! Hello square flyover states!) and settling into our new place in Seattle.

I’ll be back. I promise this great project will come to fruition. I just have to wait until I have new couch measurements first.

Looking for a REALLY fast project?

I think we’ve all seen this pillow floating around on Pinterest and I wanted a cute pillow for my office futon chair. Last time I had a Joann Fabrics discount I got this awesome red and white chevron fabric just for this project.

Elastic, basting tape, or other materials that can be tied 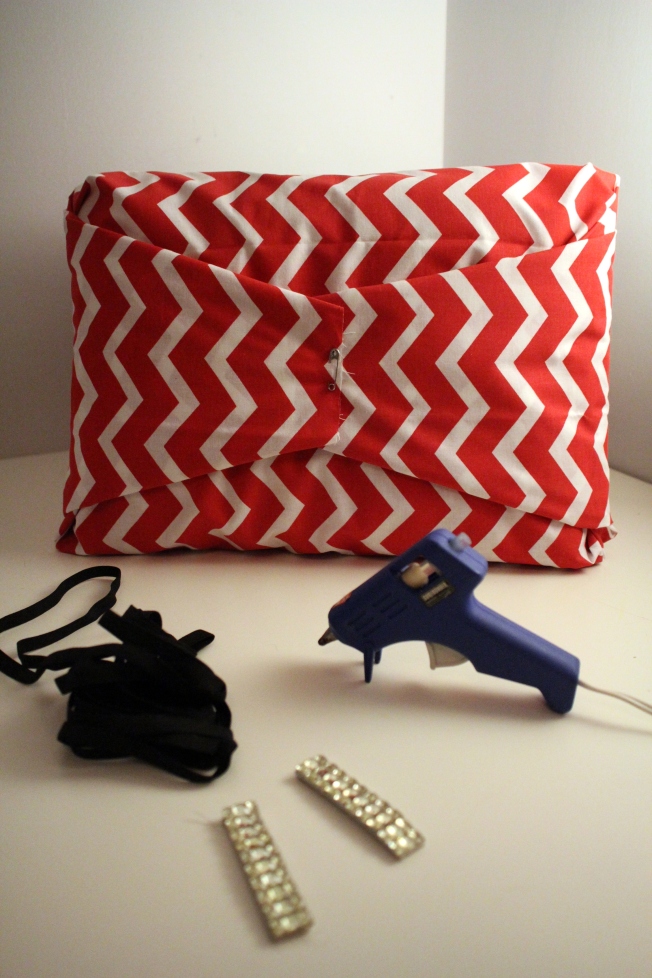 Things *I* needed because I don’t read directions before starting a project.

Unfortunately, my fabric was a bit too short to actually tie into a knot. So I got inventive and used these jewels I cut off a pair of my (favorite) sandals that broke (sadface) last year. Since I want the cover to be washable- I drink a lot of coffee in that chair, and I really like to spill things- I used a safety pin to hold it closed, then hot glued my recycled shoe-gem onto some navy blue basting tape from my sewing box. 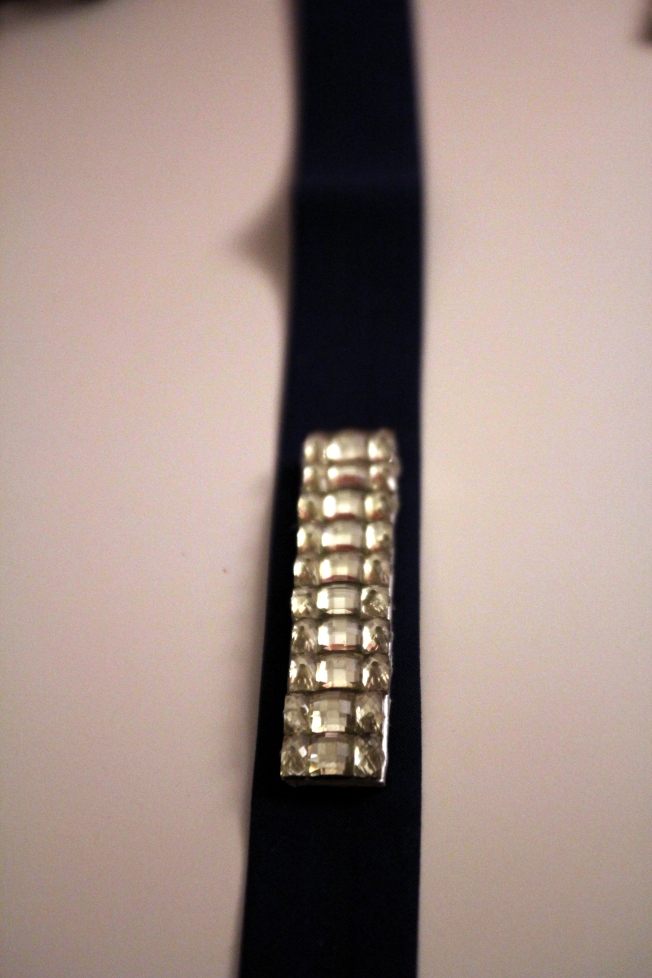 Reuse, recycle, you can handle it!

Then I just tied it in a knot and tucked it behind the safety pinned middle.

The long and short of this project is that you basically wrap the pillow as you would wrap a gift, but tie the long ends in a knot in the middle. That’s it! 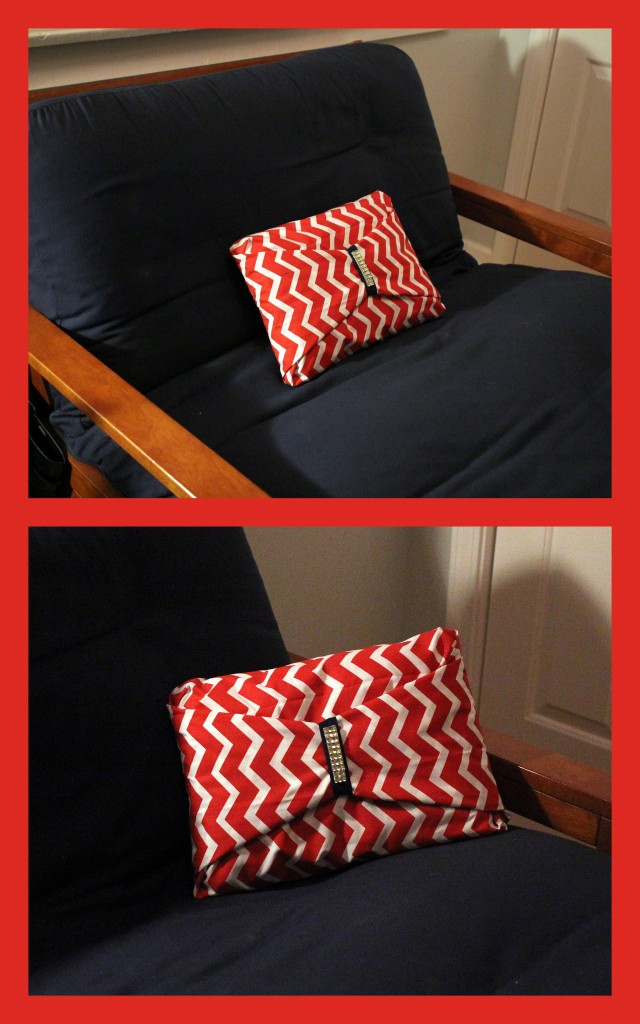 I was looking for a quick crochet project a couple of weeks ago after a 3 month hiatus from crafting. (I know. It really saddened me when I realized how long it had been.) After a 5 day staycation over the holidays, I finally felt like making something. I felt a little spark of creativity.

It seems like I know a lot of pregnant folks these days, so I looked for a baby-friendly craft. Babies are small. So baby crafts are also small, and usually fast! I saw these teething rings on Ravelry: Linked Teething Rings

I knew they would be a great thoughtful gift for my anti-plastic friend who just found out she is expecting. Plus I’ve been looking for a project to use my 100% cotton Lily Sugar N’ Cream variegated yarn. 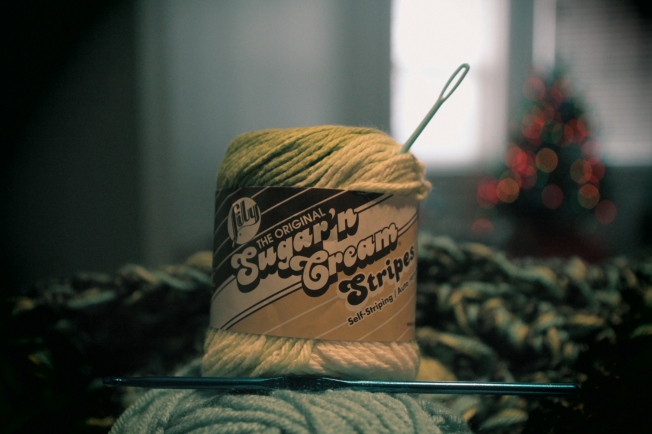 Things you’ll need:
Know how to single crochet in the round and slip stitch (Don’t know how? Check out the video tutorials over at Annie’s Attic)
100% cotton yarn
Size G hook
Scissors
Plastic yarn needle

I crochet pretty tightly, so I actually added a couple of rows before stitching the rings closed so it wasn’t too skinny.

These are so simple and fast. The best part? No scary plastic parts or chemicals, AND they can be dipped in water and frozen to sooth baby gums.

Happy New Year to everyone, and may 2014 be filled with creative endeavors!

Pandercraft
Create a free website or blog at WordPress.com.